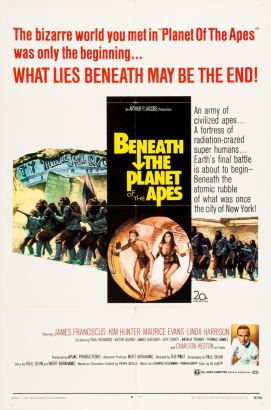 The sole survivor of an interplanetary rescue mission searches for the only survivor of the previous expedition. He discovers a planet ruled by apes and an underground city run by telepathic humans.

Brent is an American astronaut, part of a team sent to locate missing fellow American astronaut, George Taylor. Following Taylor's known flight trajectory, the search and rescue team crash lands on an unknown planet much like Earth in the year 3955, with Brent being the only survivor of the team. What Brent initially does not know, much like Taylor didn't initially know when he landed here before Brent, is that he has landed back on Earth in the future, in the vicinity of what was New York City. Brent finds evidence that Taylor has been on the planet. In Brent's search for Taylor, he finds that the planet is run by a barbaric race of English speaking apes, whose mission is in part to annihilate the human race. Brent eventually locates some of those humans, who communicate telepathically and who live underground to prevent detection by the apes. These humans, who are in their own way as barbaric as the apes, want in turn to protect their species. Brent has to figure out a way to save ...
Hide torrent description
Warning! Please enable your VPN when downloading torrents.
Your IP address: 34.239.150.57 Browser: ,
Hide your IP using VPN. Governments, hackers and corporations can record your activity whenever you’re online.
More info
We recommend you to use NordVPN when downloading torrents. It is paid service.
VPN Protect Your Privacy!
More info Become anonymous
Published on 12 April 2019 • Last updated: 15 March 2021