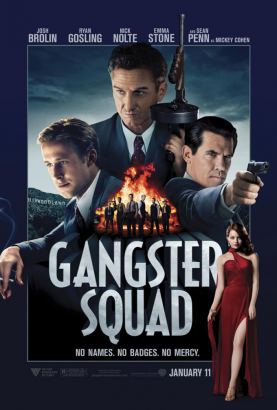 It's 1949 Los Angeles, the city is run by gangsters and a malicious mobster, Mickey Cohen. Determined to end the corruption, John O'Mara assembles a team of cops, ready to take down the ruthless leader and restore peace to the city.

It's 1949 Los Angeles, and gangster Mickey Cohen has moved in, with the intention of controlling all criminal activity in the city. He has bought local judges and police, and no one is willing to cross him or testify against him. Everyone except Sergeant John O'Mara, a former World War II soldier, whose goal is to settle with his family in a peaceful Los Angeles. Police Chief William Parker decides to form a special unit whose mission is to take down Cohen, and chooses O'Mara to lead the unit. O'Mara chooses 4 cops and asks another cop and vet, Jerry Wooters to join him but Wooters is not interested. But when he witnesses the murder of a young boy by Cohen's people, he joins them, and they decide to take apart Cohen's organization. Cohen wonders if a rival is going after him, but eventually he realizes it's the cops.
Hide torrent description
Warning! Please enable your VPN when downloading torrents.
Your IP address: 3.238.130.97 Browser: ,
Hide your IP using VPN. Governments, hackers and corporations can record your activity whenever you’re online.
More info
We recommend you to use NordVPN when downloading torrents. It is paid service.
VPN Protect Your Privacy!
More info Become anonymous
Published on 12 April 2019 • Last updated: 11 March 2021