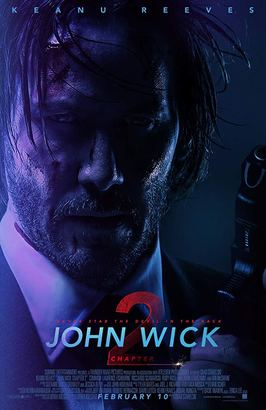 After returning to the criminal underworld to repay a debt, John Wick discovers that a large bounty has been put on his life.

Four days after the events of the first film, former assassin John Wick retrieves his stolen 1969 Ford Mustang Mach 1 from a chop shop owned by Abram Tarasov, brother of Viggo and uncle of Iosef. John dispatches Tarasov's men in a violent rampage that heavily damages the Mustang but spares Tarasov under the auspices of peace and returns home, later cementing his weapons into the ground once again.

After chop-shop owner Aurelio takes John's Mustang for repairs, John is visited by Italian crime lord Santino D'Antonio. It is revealed that to complete his "impossible task," which allowed him to retire and marry Helen, John asked Santino for help. As a form of contract, Santino swore John to a "marker," an unbreakable promise symbolized by a "blood oath" medallion. Santino presents the medallion to demand services from John, who declines, claiming that he is retired. In retaliation, Santino burns John's home.