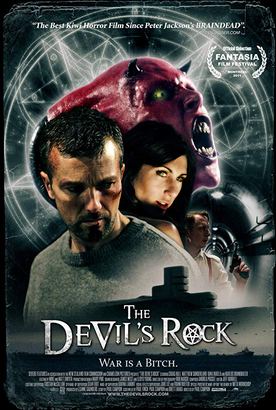 Set in the Channel Islands on the eve of D Day,two Kiwi commandos, sent to destroy German gun emplacements to distract Hitler's forces away from Normandy, discover a Nazi occult plot to unleash demonic forces to win the war.

In 1944, the New Zealander's soldiers Captain Ben Grogan and Sergeant Joseph Tane are assigned to explode a German military facility in a occupied Channel Island to create a diversion far from the Normandy on the eve of the D-Day. They hear screams inside the installation that is apparently unprotected and they prepare the explosives. When Grogan overhears a woman scream, he decides to seek her out inside the bunker and the reluctant Joseph follows him. Grogan is captured by Colonel Klaus Meyer and Joseph is murdered. Grogan sees mutilated corpses and he escapes from Meyer. When he meets the woman, he finds that she is his deceased wife Helena, who died in a airborne bombing. Soon Grogan leans that Helena is actually a demon unleashed by Meyer, who is researching the occultism expecting to create the ultimate weapon to win the war. Now Grogan is forced to team-up with Meyer to save his life against evil that is using Helena appearance to seduce him.
Hide torrent description
Warning! Please enable your VPN when downloading torrents.
Your IP address: 3.238.174.50 Browser: ,
Hide your IP using VPN. Governments, hackers and corporations can record your activity whenever you’re online.
More info
We recommend you to use NordVPN when downloading torrents. It is paid service.
VPN Protect Your Privacy!
More info Become anonymous
Published on 12 April 2019 • Last updated: 13 April 2019