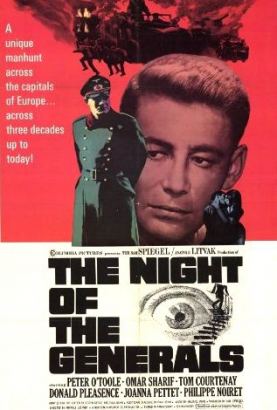 In 1942, a Polish prostitute and German agent, is murdered in Warsaw. Suspicion falls on three generals, and Major Grau of German Intelligence seeks justice which ends up taking decades.

In 1942 Warsaw, a Polish prostitute is murdered in a sadistic way. Major Grau, an agent from German Intelligence who believes in justice, is in charge of the investigation. An eyewitness saw a German general leaving the building after a scream of the victim. A further investigation shows that three generals do not have any alibi for that night: General Tanz, Maj. Gen. Klus Kahlenberge and General von Seidlitz-Gabler. The three avoid direct contact with Major Grau and become potential suspects. As Major Grau gets close to them, he is promoted and sent to Paris. In 1944 Paris, this quartet is reunited and Major Grau continues his investigation. Meanwhile, a plan for killing Hitler is plotted by his high command; a romance between Ulrike von Seydlitz-Gabler and Lance Cpl. Kurt Hartmann is happening and Insp. Morand is helping Major Grau in his investigation. The story ends in 1965, in Hamburg, with another, similar crime.
Hide torrent description
Warning! Please enable your VPN when downloading torrents.
Your IP address: 3.238.130.97 Browser: ,
Hide your IP using VPN. Governments, hackers and corporations can record your activity whenever you’re online.
More info
We recommend you to use NordVPN when downloading torrents. It is paid service.
VPN Protect Your Privacy!
More info Become anonymous
Published on 03 November 2018