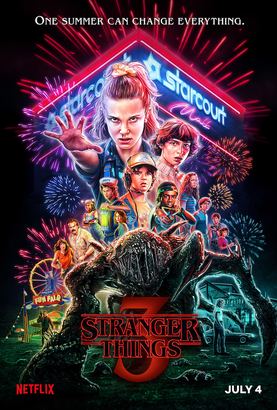 On June 28, 1984, Soviet generals give a group of scientists a year to develop technology to force open a portal to the Upside Down. A year later, in the middle of the summer of 1985 in Hawkins, the new Starcourt Mall has caused other town shops to close down, angering towns people. Joyce reveals she intends to move out of town. Mike and Eleven have developed a romantic relationship and Hopper talks to Joyce on advice of how to split the two apart. She suggests he write a "heart to heart" speech for Eleven. Dustin comes back from summer science camp, and encourages Mike, Will, Lucas, Eleven, and Max to help set up a make-shift radio so he can contact Suzie, a girl he met at camp. One night, the power goes out across Hawkins, which shakes Will, and at a nearby abandoned steel mill, a strange entity appears. Nancy has started a job at the local paper, and secures a tip about a strange event. Dustin records a strange transmission coming through his transmitter of a man speaking Russian. Billy later drives by the mill, hits something and is dragged inside.