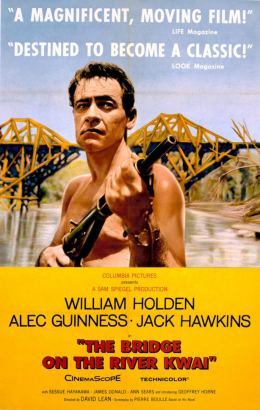 After settling his differences with a Japanese P.O.W. camp commander, a British Colonel co-operates to oversee his men's construction of a railway bridge for their captors, while oblivious to a plan by the Allies to destroy it.

This movie deals with the situation of British prisoners of war during World War II who are ordered to build a bridge to accommodate the Burma-Siam railway. Their instinct is to sabotage the bridge, but under the leadership of Colonel Nicholson, they are persuaded that the bridge should be constructed as a symbol of British morale, spirit, and dignity in adverse circumstances. At first, the prisoners admire Nicholson when he bravely endures torture rather than compromise his principles for the benefit of the Japanese Commandant Saito. He is an honorable, but arrogant man, who is slowly revealed to be a deluded, obsessive man. He convinces himself that the bridge is a monument to British character, but actually is a monument to himself, and his insistence on its construction becomes a subtle form of collaboration with the enemy. Unknown to him, the Allies have sent a mission into the jungle, led by Warden and an American, Shears, to blow up the bridge.
Hide torrent description
Warning! Please enable your VPN when downloading torrents.
Your IP address: 3.236.222.124 Browser: ,
Hide your IP using VPN. Governments, hackers and corporations can record your activity whenever you’re online.
More info
We recommend you to use NordVPN when downloading torrents. It is paid service.
VPN Protect Your Privacy!
More info Become anonymous
Published on 12 April 2019 • Last updated: 07 March 2021