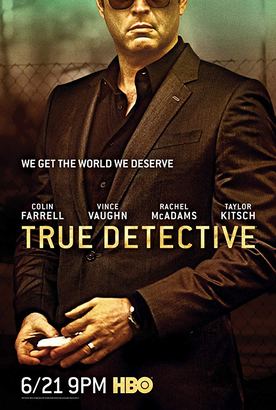 In the fictional industrial town of Vinci, California, city manager Ben Caspere disappears shortly before he is to present plans for real estate development near a new high-speed rail line. His corrupt business partner, Frank Semyon, is forced to make the presentation on his own, in the presence of his mob connections.

Vinci Police detective Raymond "Ray" Velcoro is seeking custody of his son, who may be a product of his ex-wife's rape, years before. Through flashback, Velcoro is shown meeting Semyon at a bar, where Semyon gives him the name of his wife's rapist. Velcoro is now burned out and unhinged, and also works as an enforcer for Semyon.

A third cop, Highway Patrol officer Paul Woodrugh, is put on paid leave after an actress, Lacey Lindel, tries to seduce him and later falsely accuses him of sexual misconduct when he refuses to look the other way to her speeding and violating her parole. While visiting his girlfriend, Emily, Woodrugh secretly takes Viagra and does not answer her questions about the scars on his body. Late at night, racing his motorcycle without headlights and with near suicidal ferocity, Woodrugh discovers the corpse of Caspere propped up on a bench, with his eyes burned out. Velcoro and Bezzerides converge with Woodrugh at the crime scene.

Hide torrent description
Warning! Please enable your VPN when downloading torrents.
Your IP address: 3.238.174.50 Browser: ,
Hide your IP using VPN. Governments, hackers and corporations can record your activity whenever you’re online.
More info
We recommend you to use NordVPN when downloading torrents. It is paid service.
VPN Protect Your Privacy!
More info Become anonymous
Published on 16 May 2019