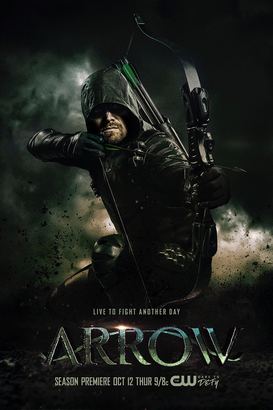 In flashbacks, Slade Wilson heads to the A.R.G.U.S. ship alone while the others take refuge in the plane. Samantha Clayton runs off to find her son William and Thea Queen follows. John Diggle's right pectoral muscles are injured while rescuing Felicity Smoak.

Oliver Queen finds Thea in critical condition and a dying Samantha asks him to look after William. Dinah Drake and Quentin Lance are attacked by Laurel Lance / Black Siren, whom he shoots. She is later saved by an unknown man working for Cayden James. In the present, Thea is still comatose and William blames Oliver for Samantha's death. Siren and her mercenary team attack the SCPD station. During another confrontation, John's hesitation gets Rene Ramirez injured. Determining Siren will next attack City Hall, Team Arrow sets a trap. However, her gang instead attacks the hideout before being driven off by Team Arrow. Quentin's reluctance to harm Siren, who is his daughter's doppelgänger, further allows her to escape. Oliver arranges another hearing for Rene to reclaim his daughter. Curtis discovers that Siren stole a prototype T-sphere. Slade tells Oliver that he is traveling to Calgary to find his son, advising him to choose between vigilantism and William. Oliver and William reconcile slightly, but pictures of Oliver wearing the Green Arrow suit leak to the media.